India’s economy continues to boom since the last so many decades and Swachh Bharat Abhiyaan (Clean India Mission) entering into second year, it’s 360 million poorest citizens remain among those [...]

While India’s economy continues to boom since the last so many decades and Swachh Bharat Abhiyaan (Clean India Mission) entering into second year, it’s 360 million poorest citizens remain among those living in some of the most dilapidated conditions in the world. The slums have become the indispensable and dark side of our country, which we can’t boast of.

Slum can be defined as ‘A residential area where dwellings are unfit for human habitation by reasons of dilapidation, overcrowding, lack of ventilation or sanitation facility and having drinking water facilities in unhygienic conditions’.

It’s so ironical that Delhi’s slums (like all over India) are the abode of lakhs of people whose work makes the lives of its better-off citizens easier and comfortable but they themselves are forced to live in worst of conditions. They don’t even have access to a basic need like functional toilets, breeding indignity and infections in their daily lives. As Katherine Boo unfolds the dark belly in “Behind the Beautiful Forevers”, life in an urban slum can be full of squalor and deprivations.

The life in Indian slums has not been hidden but Keep India Beautiful team wanted to have a first hand experience as to what real life is like in those hell kind of conditions and it chose to visit Lalbagh slum area near Azadpur which is just a few kilometres away from prestigious North Campus of Delhi University. Lalbagh is Delhi’s largest slum having a population of more than 3 lakhs and spread over an area of just one kilometer.

The world doesn’t look like what you think it looks like: It’s so strange that just a few kilometres can make a place so different from our normal world. As Keep India Beautiful (KIB) team got deep inside, it got to experience what HELL could be like. Dirty stagnant water, clogged drains, narrow lanes, cramped houses, heaps of garbage and strong stink welcomed us. This all was very overwhelming as we could feel thousands of eyes staring at us with suspicion as well as some hope. But soon we realised that all of them are very friendly as they gathered around us sharing their grievances and how each & every single day for them is filled with so much struggle for small and basic things.

1. Garbage & Filth: We could see dumps of garbage everywhere. The dumped waste emanate foul odour and at the same time becomes breeding ground for flies and mosquitoes which carry several diseases with them. Also children were playing near the garbage dumps oblivious of the fact that they may get infected with some fatal disease. Being the rainy season there was standing water everywhere, spreading all kinds of water borne diseases.

2. Miserable Toilets: The community toilets were in pathetic conditions. Plenty of them had no doors and the ones that had doors had no latches. Enclosures were there for taking showers, without doors and without tap connection. Toilets were full of filth and human excreta as water supply through pipes was not working. 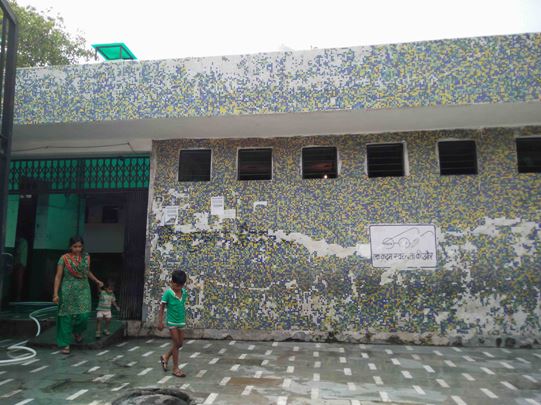 3. Deplorable condition of School: KIB team was appalled by the condition of the local municipality school, as there was no water and electricity in School, toilet was not working and class furniture including fans were in shambles. Small kids were drenched in their sweat while trying to study as if it was possible. 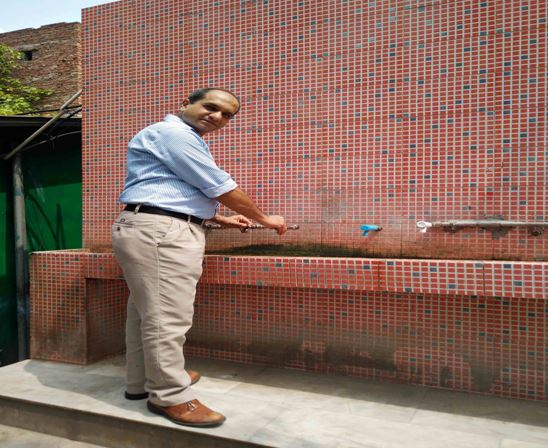 4. Public Park used as dump yard: It was a piece of a barren land filled with water and garbage everywhere and that’s why all the dingy lanes littered with rubbish were the playing ground for children.

5. Cramped Houses: It’s difficult to even imagine the living conditions of the houses there unless and until you actually experience this nightmare. Six to eight people share a cramped room and only they know as to how so many people fit in such a small room. The streets are narrow and the sewage water stagnates in open surface drains, which emit bad smell.

Just a few hours in those slums made us feel suffocated and nauseated. We were imagining how anyone could spend their whole life there, which was the case with majority of them. As a Nation we talk about Clean India Mission (Swachh Bharat Abhiyaan) but how it could be achieved when a huge proportion of our country continues to live in such inhuman conditions or are we just trying to cover the reality that the worst side does exist?

P.S. :  You can contact at info@kib.org.in if you wish to be part of campaign “Improving lives in Slums”. Website: www.kib.org.in